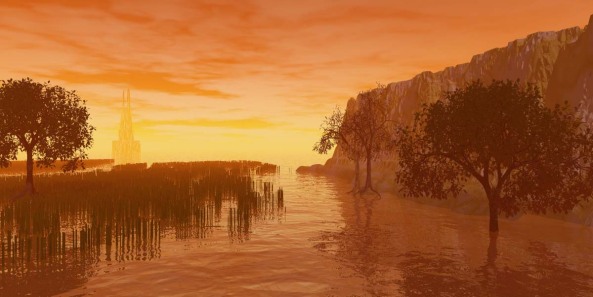 The marshes of Barresh seen from the direction of the great esscarpment, as in Watcher’s Web.


As I heard today that my novella The Shattered World Within will be published in Giganotosaurus (and I’m extremely happy about his; last year they snatched two Nebula nominations out of twelve stories published, so it’s a well-read magazine), I made some comments about relationships between this novella and published work. Facebook and Twitter are not the most ideal venues to explain those things, so here we go.

In my Science Fiction worlds, I use (not exclusively, but rather a lot) two different worlds. One, I refer to as “the space opera world”. It has, space opera-like, different types of humans who have evolved like Darwin’s finches, and we–the humans we’re familiar with–are only a small branch. In this world, there is FTL travel, which is a network of custom-made wormholes, a network that relies on technology and politics outside the control of Earth humans.

This is the world I’ve used in Shattered World, but also in The Far Horizon

. Shattered World is set about 100 years in the past, Watcher’s Web in the present, and the novel Ambassador (Ticonderoga Publications 2013) is set about 200 years into the future. Due to the Darwin-finch effect, it is a rich world, with many different corners that don’t need to (and often don’t) overlap. But you may recognise some names. Barresh (where most of Watcher’s Web is set) is the locality of the above picture-doodle in Bryce–although the buildings need to be lower. Other names will we Asto, the Coldi people, Aghyr, and Miran, or Hedron, the locality of Shattered World, although it doesn’t yet have a name in the story.

The other world is the one I call the ISF/Allion world. This world has one human starting point (Earth), and spends a lot of time without FTL travel. It is developed eventually, but it’s not easy, as in space opera. In this world, Allion Aerospace Ltd was a company that boldly went… er, no… boldly bought the ISS off the various contributing nations when they wanted to let it infall and developed it commercially.

(Seriously, I made this up before all this GFC and private space flight business started)

They built a self-sustaining habitat, supplying the station from their base in Indonesia. They scouted workers amongst brilliant postgrad students at western universities, disgruntled by their lack of prospects in their home countries, and their inability to secure a working visa for their home countries. By far the majority of their recruits are women.
They also put the first human (Chandra Lee–non-white, non-male, non-American) on Mars, started a settlement there, and the company became fully space-based.

The rest of the–more traditional–world has been playing catchup since, and both Allion and the official, government-sanctioned International Space Force have made mistakes, fought skirmishes and one all-out war.

This world is limited to hard SF. It encompasses a much narrower range of environments and stories, and most stories fit after the other (although you can read them as stand-alones). There are also a lot of short stories in this world, such as Trassi Udang (Belong

. All of these are seen from ISF perspective. His Name In Lights: a novella

is from Allion perspective. Watch out for a longer work, tentatively called Shifting Reality, that follows where Poor Man’s Travel left off, and involves Ari from Trassi Udang when he is four years older.

Oof, I don’t think I would have fitted all of that in 140-character Twitter posts.

2 comments on “Words and worlds: about my SF fiction worlds”