The short story Luminescence was published in Martian Wave in 2010. Because it is part of a world in which I ‘ve set more stories, and part of a greater story, I’ve adapted it and it is now available on Smashwords and Amazon. Click on the image for the Amazon link.

A bright flash turned the ice under my feet into a sheet of white.
The inside of the inflatable dome blazed in X-ray vision as my visor’s auto-polarise function cut in, providing me with a skeleton-view of the flexible struts that held up the fabric.
A split second, and then the murky orange hue of the Titanian atmosphere returned. Darker still inside our tent on the ice of Kraken Mare on Titan’s south pole.
I depolarised my visor, heart thudding. Black spots danced in my vision. ‘Paul? Did you see that? Paul? Do you hear me?’
I stared at the entry hole in the ice in the middle of the tent. The black surface rippled.
‘Paul!’
There was no reply.
The snaking hoses of the breathing apparatus and the heater were the only sign of Paul’s presence in that blackness. Through my suit’s helmet I couldn’t even hear the humming of the air compressor in the shed.
Static crackled in my earphones. Paul’s words garbled into unintelligible mush, laced with excitement.
‘What is it? What do you see?’
‘It’s . . . beautiful. You can’t begin to describe it, Hadie. There’s colours and pictures and . . . It looks like a spider’s web . . . Holy fuck!’
The line went dead. I strode to the reception unit and pressed the reset with clumsy gloved hands. The roamer icon tracked over the screen and found . . .
Nothing.
Oh for fuck’s sake. This lousy radio never worked when you needed it.
I waited. I told myself not to worry. Paul could take care of himself. The hoses still pulsed, and now–relief flooded me–the downrope was moving, a sign that he was climbing up the ladder.
Sure enough, ten minutes later Paul’s helmet broke the surface, then his shoulders, followed by his be-suited arms. I hauled him up the last rungs of the ladder, the touch awkward through both our suits.
‘You OK?’ I asked.
Vapour rose from the suit, methane gas curling towards the roof of the tent, where it would condensate against the fabric, run down until it met the ice and freeze in globby stalagmites.
Paul dropped his sampling canisters, which he’d taken to collect samples from bacterial patches we had found living under the ice. My helmet receiver remained silent; I couldn’t see his face behind his visor. I cursed. This time when we got back to the habitat, I would complain to the Research Division, fuck the notes it would earn me against future promotion. It was one thing to let scientists work with sub-standard equipment when they worked in an environment where they could breathe the air, and they could sit around waiting for a bail-out if things went wrong. We didn’t have that luxury. Small things about the Titanian atmosphere like the general lack of oxygen and temperatures that would freeze your butt off meant that any equipment malfunction quickly turned serious with big fat capital letters. The tight-arses could at least give us receivers that fucking worked all the time, not just when they felt like it.
I guided him across the tent. His steps were stiff, that all-too-familiar feeling that leg muscles had frozen senseless, through the suit and layers of insulating clothing.
Into the air lock. I pulled shut the thick door and operated the panel. Waited. Just us in our suits, and a tiny light. Vapour rising off Paul’s suit, curling up to the vent in the ceiling. I hated the silence.
Lights flashed; the inner door opened. I preceded Paul into the familiarity of the tiny lab of Research Station 5: a simple table and four straight-backed chairs, lab benches with stacks of sample tubes and an assortment of equipment parts, mostly spare parts for the dive gear, because the samples needed to be kept outside–too warm for them in here. A rack with protective clothing. Thermal under-suits.
Monitoring and comm screens blinked warnings against the back wall. Initialisation sequence not detected. Unease clawed at the back of my mind.
I flicked the heater up as far as it would go. Fans jolted into action. The pump hummed below the floor, sucking up methane from under the ice.
The light was warm in here, and when I wriggled off my suit’s helmet, the air heavy with the scent of synth-coffee. Empty cups still sat on the table.
Paul sank down in one of the chairs. He reached for his helmet and I helped him unclip it.
‘Paul? What happened?’
He said nothing, his hazel eyes staring at the opposite wall like a blind man’s.
‘Paul!’
I swung one leg over his so I faced him. His expression remained blank. His skin looked marble-pale, his eyes wide open. Most of his curly hair lay plastered to his head, his lips dark with cold. Those lips I’d kissed before he went down.

The title speaks for itself. Read the story here.

Here are the first couple of paragraphs:

“So – your ancestors were pearl divers in Western Australia?” he says.

“Yup,” Yuriko replies, in a who cares sort of way that she hopes reinforces her tough image. But she thinks, So, you said you were fit? and she’s looking at the thermals stretching over his belly and the pudgy hairy spiders that are his hands.

Yuriko smiles and thinks, But how long since you’ve used them? The spec from Ianni said he was a company director. David Woodridge is his name, although he introduced himself to Yuriko as ‘John’.

… Apparently. According to various agent sites.

The Far Horizon is a book I started writing when I was reading fiction to my kids every night. I noticed that there was an awful lot of fantasy for younger readers, but no science fiction.

I wanted to write a story that highlighted a child’s perspective on life in space. How cool would it be to explore a space station, to get into trouble for doing so, and to see and overhear things that no one expected you to hear? In books, life in space is almost exclusively the domain of serious adults. Playful children have little place there. But when we consider settlement in space, there will inevitably be children.

This book is about that experience. It is about kicking against the clique mentality of closed communities, about making friends where you never thought you would find any. While I wrote this with readers of 8-13 years in age in mind, I also slipped in some references that adults might enjoy.

The great cover was designed by Olivia Kernot, and proofreading was done by my editor buddy Simon Petrie at ASIM.

So, if the market wants SF for younger readers, show me!

Clicking on the image will take you to the Amazon Kindle link for this book. A link for Smashwords is in the window to the right.

We’ve been having a good run with the magazine. The year 2010 saw no less than seven issues released, and 2011 is starting off pretty good.

But there is no way, just no way you should miss Kimberley van Ginkel’s story Star-crossed. It’s a deceptively simple tale, but if you’re not in tears at the end of the story, you may abuse me. You can buy a single issue in PDF or dead-tree version on the magazine’s website. Get it. This one story is worth the price of the entire magazine, even the price of a subscription. And no, I didn’t select the story, nor did I slush it, so I have no vested interest. 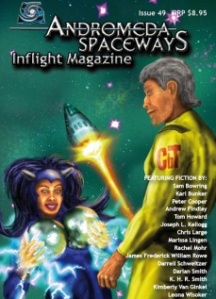 Uber-editor Simon Petrie writes: ASIM 49. Assembled by the crack team of Robbie Matthews and Edwina Harvey, issue 49 is a veritable smorgasbord (or, as it should more properly be, smörgåsbord) of deities, demons, washed-up superheroes, witches, crones, aliens, explorers, sidekicks, and frozen desserts. But moving beyond the membership of the Andromeda Spaceways co-op, to the contents of the issue itself, you’ll find work by Chris Large, Marissa Lingen, Rachel Mohr, Kimberly Van Ginkel, K. H. R. Smith, Darian Smith (no relation), Sam Bowring, Tom Howard, Joseph L. Kellogg, Karl Bunker and Leona Wisoker, as well as poetry by Peter Cooper, Andrew Findlay, James Frederick William Rowe and Darrell Schweitzer. There’s a reprint of issue 48′s Marty Young story, with which we were somewhat too imaginative in the typesetting first time around, there are book reviews and interviews and artworks. And, of course, ink, rather a lot of ink, for what is a magazine without ink? 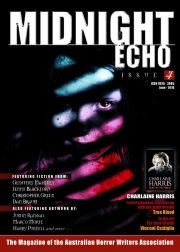 Midnight Echo is the magazine of the Australian Horror Writers Association. Issue number 4 is out now, and includes my story Little Boy Lost, with an awesome illustration. 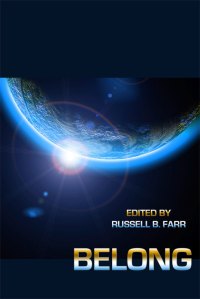 I haven’t used this blog for promotional purposes, but I want to give some attention to this awesome anthology edited by the awesome Russell Farr, from Western Australia, where he runs Ticonderoga Publications, a small press that does awesome things. Check out their books

The Belong anthology contains stories about immigration and the people (or aliens) it affects, an idea inspired by the many varied immigrant populations in Australia. It features 113,000 words of original fiction from around the world: Australia, Canada, Argentina, United Kingdom, U.S.A. and Belgium. It will be coming out in April for Swancon, and is available for pre-order from the publisher.

The TOC is as follows (and yes, I declare self-interest, because I have a story in this volume):