In a recent post, I talked about the answer to the question: what if the Earth had no moon? The question I answered in that post really should have read: what if we suddenly took the Moon away? Or, alternatively, what functions does the Moon fulfil today? And the answer was: not terribly much.

Recently, I read the book What if the Moon didn’t exist, by Neil F. Comins, and it goes into far more detail. Today, the Moon appears in the sky like benign companion. It is pretty, but not terribly vital to us. It causes tides, but the Sun also does that. It provides a handy measure of the passage of time, and it gave us the concept of a month. However, we don’t actually need it. Even the fact that the human fertility cycle and a moon cycle are similar seems pure coincidence. If the Moon was so important to fertility, then all animals would have developed a cycle based on it.

The picture, though, looks very different when you consider the formation of the Earth-Moon system. The Moon formed from a collision of a Pluto-sized object with the early Earth. Right, there goes the peaceful reputation.

In answering the question: what if the Moon didn’t exist, the book takes the history of the Earth back far enough so that this object (remember we’re no longer allowed to call it a planet) missed Earth and left the solar system or found its own orbit around the Sun.

In this case, life on Earth would have been hugely different from the way we know it.

One of the most important things the Moon has done over those billions of years since the collision is to slow the rotation of the Earth. It does this through tides. The Earth rotates, and the Moon pulls whatever part of the Earth facing it. If this part is water, it will rise towards the Moon. But because the Earth rotates, the water is always trying to catch up with the Moon’s current position. Over many, many years, this slows the Earth down. How much? At the time of the Collision, the Earth made a full rotation in just eight hours. Without the Moon, the Sun would have slowed the Earth down, but not by far as much, probably only to about ten hours.

If the thought of ten-hour days doesn’t drive you to distraction, think about what it would have done to the weather. Current weather patterns are determined by many things, including differences in temperature and land shapes. The prevailing movement of weather from west to east is caused by the fact that the Earth rotates inside its own atmosphere, and the atmosphere is not rotating at the same speed. If the Earth had ten-hour days, those west-to-east patterns would be much stronger. In short, we would have a lot of strong wind, and violent weather, and with both weather and ten-hour days combined, a very different planet.

That is not to say that every planet without a moon the size of ours would rotate fast. Mars has a similar day, and Phobos and Deimos are puny captured asteroids that barely deserve the term ‘moon’. Venus has no moons at all and its day is longer than its year. Clearly, a planet does not need a moon to slow its rotation to 24 hours,. Neither does thist answer the question as to whether a random planet in the habitable zone needs a large moon. Earth needed the Moon, but another planet may not.

I’m in various stages of reading all of these. 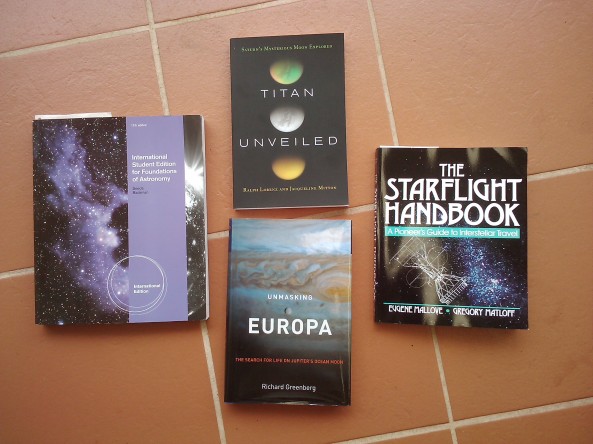 Foundations of Astronomy by Back and Seeds, 2010. Make sure you get the International edition, since you do not want to wrangle miles and pounds and other non-metric nonsense. Very accessible basic and less basic information about everything in space.

Titan Unveiled by Ralph Lorenz and Jacqueline Mitton, 2010 edition. All the latest about Titan. Written in non-scientific style.

The Starflight Handbook by Mallove and Matloff 1989. This was recommended to me by the good people of the Analog forum. Although published a good while ago, there has been little change in the basic concepts and ideas. It’s making the ideas work that’s the hard part. If your setting includes anywhere near realistic space travel, I’d put this on your must-read list. Even if you decide to hell with the laws of physics, you know what principles you are breaking, and you know where to insert your magic device.

I bought all these books through abebooks.com 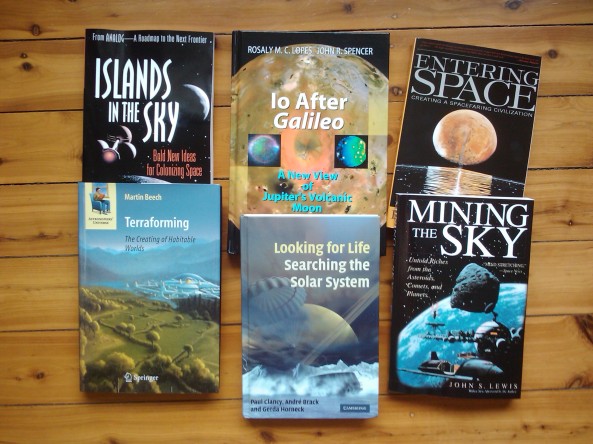 Yes, I’m a Science Fiction writer. Why are you asking?