Blood & Tears, book 3 of the Icefire Trilogy, is now a reality on both Smashwords and Amazon

I’m very happy with the way it has turned out, and this proves that I can bring a project of this size (total 300K words) to completion.

Just for fun, and completeness, here are the three blurbs: 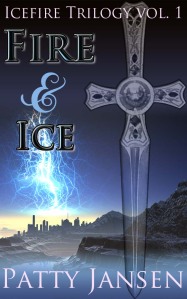 Deep under the City of Glass in the frozen southern land, an age-old machine called the Heart of the City radiates a power which locals call icefire. Most citizens are immune to it, but a few, always born with physical disabilities, can bend it to their will. For fifty years, the ruling Eagle Knights, who fly on the back of giant birds, have killed these Imperfects, fearing the return of the old royal family, who used icefire to cut out people’s hearts, turning them into ghostly servitors.
The old king’s grandson Tandor only sees the good things icefire brought: power and technology now forgotten while the people of the south live in dire poverty. He’s had enough of seeing his fellow kinsfolk slaughtered by ignorant Knights, of Imperfect babies being abandoned on the ice floes to be eaten by wild animals. His grandfather’s diary tells him how to increase the beat of the Heart the first step to making the land glorious once more. Arrogant as he is, he sets the machine in motion. All he needs is an army of Imperfect servitors to control the resulting power.
Isandor is Imperfect, an ex-Knight apprentice, betrayed by his best friend and running for his life.
The queen Jevaithi is Imperfect, living like a prisoner amidst leering Knights, surviving only because the common people would rebel if their beloved queen were harmed.
Both are young and desperate and should be grateful that Tandor wants to rescue them from their hopeless situations. Or so he thinks. The youngsters, however, have no inclination to become heartless ghosts, but while they defy Tandor, the Heart beats, and he alone cannot control its power. 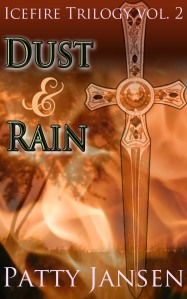 Fifteen years ago, a brilliant scientist built a barrier against the dangerous power that radiates from the City of Glass in the southern land, allowing the citizens of Chevakia to live without fear of their lives. Since then, the democracy of Chevakia has prospered, with free-thinking scientists developing steam power and the beginnings of electricity.
But the power, which they call sonorics, controls the weather in Chevakia.
Senator Sadorius han Chevonian is the country’s chief meteorologist. While taking measurements for his job, he is the first to notice a rapid rise of sonorics levels out-of-season. The senate is locked in trivial debate, and to make them listen, he has to take a step he never thought to make.
After the huge explosion of the machine they call the Heart of the City, Loriane has fled the southern land with the sorcerer Tandor, who hovers in and out of consciousness. But while Tandor isn’t speaking, she cannot confirm her fears that he caused the explosion, and that the child she carries has something to do with his twisted plans to seize power from the Eagle Knights who rule the City of Glass.
Just before the explosion, southern queen Jevaithi fled into Chevakia with her young lover Isandor. While they think they’re free of the tyranny of the Eagle Knights, it soon becomes clear something very bad has happened in the City of Glass soon after their escape. Something so bad that it sends waves of sonorics into Chevakia, causing even the Chevakians to flee.
Several streams of refugees are heading for the Chevakian capital. Southerners by train, Chevakians by road, into a city that is tragically unprepared, a country in turmoil with a leader whose support hangs by the merest thread.

Following the destruction of the City of Glass through an explosion of sonorics, huge numbers of refugees have descended upon the Chevakian capital Tiverius.
The refugees are mostly members of the rebel group Brotherhood of the Light, supporters of the old royal family. They are injured, scared and hungry, and few speak Chevakian. The young Queen Jevaithi and her lover Isandor are amongst them, safe from the Eagle Knights for now.
Young Eagle Knight Carro is waiting in an old farmhouse with his fellow Knights for the order to invade the camp, capture the Queen and deliver her back to his father, where she will continue to live as imprisoned puppet for the Knights’ tyranny.
The Chevakians know none of this, and struggle to contain the refugee population, and the dangerous sonorics contamination the people have brought from their ravaged country, contamination that defies Chevakian efforts to contain it, and is getting worse, not better.
In their struggle for power, the Brotherhood and the Knights disturbed something from an ancient and magic civilisation.
The sorcerer Tandor knows what happened, but he is on death row in a Chevakian jail.
The southern woman Loriane is aware of the things that are required, but she is amongst Chevakians who can’t understand her.
The Chevakian proctor Sadorius han Chevonian could put the pieces of the puzzle together, but he is struggling to keep the peace, and besides, Chevakians don’t believe in magic.
Meanwhile, the massive, and malevolent, sonorics cloud drifts towards the city, hungry for revenge.